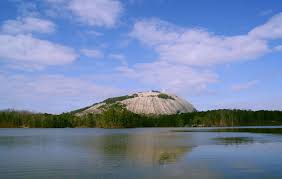 We decided to camp over at Stone Mountain which is a Georgia State Park and we had a beautiful view site right on the lake. Some of the waterfront sites are located on a steep descent to the lake shore, so backing up and parking is a bit hairy. 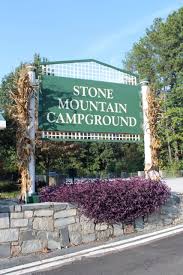 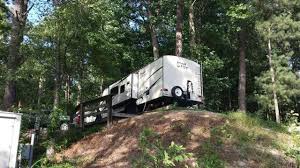 Stone Mountain is a tourist hot spot in the Atlanta area and, in season, it attracts thousands of visitors. Perhaps that is why we did not observe much wildlife at all. At this time of year, we should be seeing flocks of migratory birds coming through this area, but we saw only a few ducks on the lake. Like Great Smokey Mountains National Park, we are left with the question of how to balance citizens rights to enjoy their national parks with the impact that high volume traffic on the ecosystem. This park has the flavor of entertainment vs a traditional state park and it is not our favorite overall. It is quite “Disneyfied”  with train and tram rides, large hotels, a golf course and higher end restaurants. A part of the mountain is carved and a laser light show is broadcast along with fireworks. It’s big advantage is that it is close to our Decatur kids.

We spent most of our Georgia time with our  Decatur kids. Scott and Jamie live in Decatur and we had a wonderful visit with them. Chef Scott fixed dinner every night and Arnie was treated to his all time favorite scallops. What a joy it is to see them even for a brief visit. For years we worked at jobs that limited our ability to travel to see all of our kids as often as we wanted and now we are so grateful for this time of life to focus on our families again. On this visit, we had an opportunity to say a sad goodbye to Alley Cat who, at sixteen, crossed the Rainbow Bridge a couple of days after we left. She was Scott’s first gift to Jamie and a symbol of that season of their lives when they lived and loved in the Florida Keys. Good-bye little Alley, rest well and peacefully now.

We are hoping next summer to spend some time with Val and Kevin who  just informed us that we will be Grandparents in May. That was exciting news! This will be Arnie’s first Grand baby and we are working on the details of spending the summer in New England to welcome this new life into the world and help out a bit too.

We left Stone Mountain, GA, early this morning for a four-hour jaunt through Alabama towards Florida Caverns State Park to spend a few days exploring.The route from Georgia took us through Alabama as we were headed to the Panhandle. Somewhere in the  middle of nowhere land Alabama we had a Chance Encounter with a railroad track. Arnie approached with due caution, but the perfect storm happened right on the tracks. We crossed the double track with a ” thunk thunk thunk thunk” followed by a screeching sound and a shocking pull on the brakes. We both instinctively glanced over at the side mirrors to see the camper careening side to side behind the truck. The scream stuck in my throat as Arnie guided the truck and camper to a stop. We were now in a turning lane in the middle of Eukaula, Alabama with our hearts pounding out of our chests. I jumped out to call 911 and began to direct traffic around the vehicles while Arnie hustled to the hitch to survey the damage.

Before we knew it, Jerry Jr of Jerry’s Appliance, Our 1st Road Angel of the day jumped out of his service truck with tools in hand and was immediately lying on the pavement on his back tinkering the hitch back into service. He looked at Arnie and declared, “You need a new ball. You’ve bent the crank and messed with the tongue.”  As Jerry diagnosed the damage, Arnie was giving a running narrative of how it happened, telling him that we bounced once and we bounced twice and bounced it right off the ball, etc. “Yup, Jerry repeats about six times, Y’all are gonna need a new ball! Jerry ordered me back in the truck and directed Arnie to pull into the next street and the church parking lot. There he completed the repairs and soon had us on our way. As we pulled out, he yelled, “Remember to stop at Walmart now, cuz y’all gonna need a new ball.” Someday I will laugh at this conversation, just not today.

We decided to stop at an RV Service place if we could find one. We googled the area and were surprised to find one just 15 miles ahead on our route. I called ahead and spoke with a really nice lady from Campbell’s RV who told us to come right in and they would take a look to be sure we were safe and didn’t have any hidden damage. Pulling in, we were quickly introduced to our Second Angel, Lorraine Campbell, whose family owns the store. Lorraine is a very pretty Mom of two college age boys and a teenage daughter, but she looks way too young for that! This lady with the great big smile is also an RV mechanic! She dove right in with great competence and went over the hitch in detail. Thank you for the peace of mind that allowed us to continue our journey with reassurance. We are grateful for our Chance Encounter with her. Lorraine’s family has owned this business since 1988 and if you are ever in the area of Headland, Alabama, but sure to stop in and see this great bunch of people. They do sales, service and consignments and we can vouch for their reasonable prices. Lorraine gave us great service and peace of mind for $10.00. They can be contacted at campbellsrvsales@centurytel.net or 334-693-2580.

Lorraine kindly showed us a couple of tricks of the trade to make it even safer and assured us that we were good to go. The problem most likely originated with the hitch not being completely seated for some reason and when we bounced so hard on the railroad tracks it was just the perfect storm.

We continued on our way again to Florida Caverns State Park and settled into our driving routine. Arnie driving, me navigating and crocheting so that I don’t act like a backseat driver/nag. I finished nearly a whole afgan on the trip, so it must work. But, you might want to check with Arnie on that to be sure. We arrived at our next destination and, as we were driving in, I commented to Arnie that it looked like they had a lot of water lately. The swamp was right up to the road and the cypress knees were below the water line. But, we had never been here before, the spacious campsite was dry and so we thought perhaps it was normal. We set up camp, fixed a quick dinner and went to bed early, tired from the stress of the day earlier. We were looking forward to exploring this State Park since it was built by CCC Workers and Arnie’s Dad labored on a similar project in New Hampshire. There was a statue at the entrance to the Caverns and it bore an uncanny resemblance to Mr. Jaquith. We had to take a picture of Arnie in front of it. 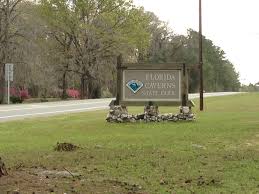 About 20 minutes after we hit the sack, we saw the beam of large flashlights and heard a loud knock at the door. Arnie yelled, “Can I help you?” and a voice answered, “It’s the Rangers. We’ d like to speak with you outside.” The guilty teenager who still lives inside me immediately took inventory of what transgression I was about to be brought to task for. Could it be that Cracker is a non-native species and not allowed in this park? Did we drive too fast coming in? Did someone complain about us taking so much time to back the camper in? Did we make too much noise? Did they see me eat the last cookie (you know what I mean, Roberta)?

What rule did we break or what sin did we committ? We yelled back that we would get dressed and be right out. That took a minute since we like to sleep au natural (now you all know). We got our pants mixed up in the dark, we were whispering about what the problem could be, we were acting like to teens caught in an illicit place together. I would not have been surprised to see my Dad round the corner and ask loudly, “Barbara, what were you thinking?!!!”  Finally, we exited the camper, a bit winded, but ready to face the music.

The two Dudley Do Rights with their giant flashlights proceeded to inform us that they were coming around to speak with each camper to let them know that all of the big rigs were under mandatory evacuation. Smaller units like ours would be able to pass on the back exist which was not flooded…………yet. We could leave now or stay the night and re-evaluate in the morning. Since the rain had ceased for the moment, we decided that we should try to get a good nights sleep and then see what the morning would bring. After all, we had already had a hard day.

In the morning, we called the Rangers station and they told us that the whole campground was now under mandatory evacuation and that we should try to be out in the next two hours. The Chipola River was rising at an unprecedented rate and the campground could soon be waist deep in water. Imagine what creatures would be flooded out of their dens and swimming about in that water! We did the hustle, broke camp, jumped in the truck and headed out once again. We had not gone far before we encountered water flowing rapidly across the road and a bridge that was nearly overtaken with the current. The Rangers had assured us that this road was pass-able, but it was unnerving. And if this was not enough, next we came upon a tree fallen across the road! But the Rangers were terrific and had it cleared within a half hour. Off we went with a friendly wave and a sense of relief to get to higher ground.

The good news is that the side of the park where the Caverns are was not flooded and we were able to take a tour before we left. It is awe inspiring to see these hidden caverns that have taken eons to develop. 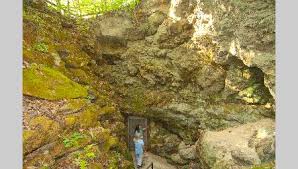 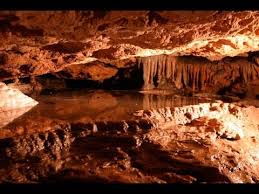 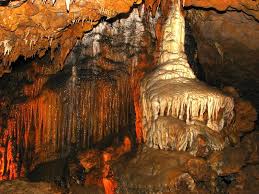 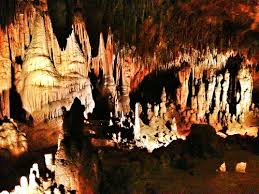 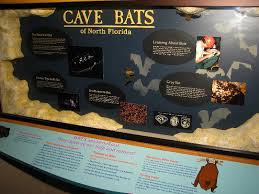 While the caverns are home to a colony of bats, we did not see any on our visit. Some of the caverns were closed off due to the flooding. Now that I write this, I wonder about the wisdom of going 56 underground when the whole area is flooding? Glad I didn’t think of it then!

Next destination………..Cedar Key RV Resort. Here we will spend a few days exploring the Suwannee River Wildlife Management area and just resting at camp a bit. It’s been an eventful few day and let’s hope that this stop on the journey has a little less excitement in store for us!