We are having such a blast traveling around and seeing this beautiful country, and enjoying Chance Encounters with the people and creatures who live in the places we are visiting. but sometimes we meet  creatures we could really do without. It is hard for me to admit that, being of the persuasion that every creature has a place in the universe and a purpose to fulfull.

THe gators are intriguing, the snakes interesting. The skunks are a distant memory of New Hampshire. But , sorry, the Stink Bugs, we can do without.

We first saw some of these fat flying bugs in Virginia and then we think we took some of them with us as stowaway to Tennessee. One day we awoke to find an unusual obnoxious odor coming from a wet yellow spot in the bed. It smelled like someone had snuck in during the night and poured Campbell’s Vegetable Soup all over one corner of the bed.

I quickly went down the list of possible problems.

So, if it wasn’t us, who or what peed the bed? No one was claiming responsibility, so we had to think more broadly. I remembered that we had seen these fat ugly bugs a couple of days ago and that when I snatched them with a paper towel and threw them outside, they left a smelly residue on the towel. Could they have made this mess?

We did a quick Goggle search, confirming that, yes, indeed, the culprit was the nasty Stink Bugs. We were all relieved to be off the hook for making that mess. I went to the website of the University of Pennsylvania’s Department of Entomology to learn more. I learned that ” this  bug in the insect family Pentatomidae is known as an agricultural pest in its native range of China, Japan, Korea and Taiwan. Recently, it has become a serious pests of fruit, vegetables and farm crops in the Mid-Atlantic region and it is probable that it will become a pest of these commodities in other areas in the United States.”

The Stink Bug becomes a nuisance pest both indoors and out when it is attracted to the outside of houses on warm fall days in search of protected, overwintering sites. The nights were cold in the Virginia mountains and I guess that our little heated camper seemed very appealing to these intruders.

Finally knowing what I was dealing with, I stripped the bed and the stain went through the sheet and mattress pad right to the mattress. It took a couple of hours to shake out every stitch of linens, cushions and bleach everything. Arnie ran the laundry and we finally got on top of the problem. All is well, but I will never open a can of Campbell’s Vegetable Soup again. 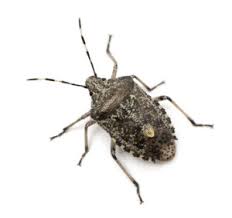 One thought on “What Stinks?! :A Chance Encounter we could do without”