The historic Rex Theater is located in downtown Galax and is a landmark for live bluegrass and old-time music. This downtown theater may be a relic of days gone by in many towns, but not in Galax. Here, the Rex is a thriving hub of entertainment. The historic Rex theater closed in the 1980’s after showing movies for more than 40 years. Volunteers renovated and restore the old theater and brought it back to life as a venue for live performances. The theaters Heather peace is a live radio show every Friday night. The sounds of bluegrass and old-time music can be seen and heard live at the Rex, or you can  tune in on the radio at WBRF 98.1 FM Galax, VA. The doors open at 7 p.m. and the show starts at 8 p.m. Most of the shows are free but the theater accept donations for upkeep and continuing renovations. 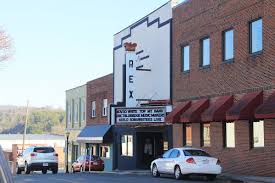 The theater’s centerpiece is a live radio show every Friday night, Blue Ridge Backroads.  Most shows are free but the theater does accept donations for upkeep and continuing renovations. Shows feature the many bluegrass bands and old-time bands from the regions with additional appearances from professional groups. The Rex is part of the Crooked Road Heritage Trail which promotes music venues and landmarks in Southwest Virginia. It is owned by the city of Galax and continues to be operated by volunteers.

The night that we went, we listened to a three generation, seven piece Bluegrass ensemble that was a delight. The thirteen year old granddaughter, Maggie, was talented and clearly her family is committed to being sure that she knows her roots. You can hear more from this band at http://www.sigmondstringers.com

One of the old-time songs that this group sang had us laughing really hard!

We saw some of the same people at the Rex that we had encountered at some of the Jams we’ve been going to. It is such a joy to see them dance both flat-footing and the two-step along with an occasional square dance. It is a very friendly place here and after encountering these same folks a few times, they always wave hi and often come right up and start a conversation. We have had a warm welcome, with folks who are interested in sharing the music and the songs that mean so much to them.

We have had many Chance Encounters with folks who reach out with warmth and propensity to share of themselves so generously extends to animals too. Even Wicca has made a new friend. Golf Cart Benny, the Security Guard for the RV Park we are staying in  picks her up each day and takes her off for a ride. Wicca is a dog who lives to ride around on a golf cart and she hears him coming from afar. She is a disloyal little terrier and jumps right up for her excursion with not even a glance backwards. We don’t know Golf Cart Benny’s real name, but he is a lifelong Fries resident and generously shares his  wealth of knowledge on the area. He is a neighbor of the owner of the park we are staying in and he rides around making sure that everything is safe and secure. He loves dogs and people and we hope that he stays well for a long time. He shared that he is suffering from a brain tumor that is not operable.