Arnie and I were excited to visit another Army Corps of Engineers project on the Georgia/South Carolina line near Augusta. We stayed at Big Hart Campground, one of the 13 campgrounds associated with J. Strom Thurmond Dam and Lake at Clarks Hill. We absolutely loved this park! The campsites are spacious and private and nestled in a pine and hardwood forest. It was a real treat as this is real camping, none of the crowding associated with most of the private campgrounds where campers are lined up close together. 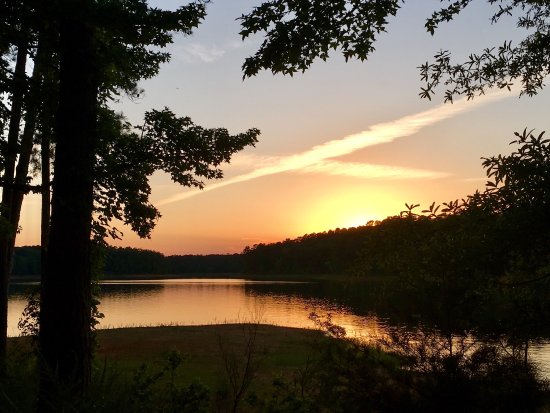 This dam and lake is the largest of the ACOE projects east of the Mississippi River, encompassing 151,000 acres of land and water.  It is no wonder that this lake is one of the 10 most visited Corps lakes in the nation. The scenery around the project is breath-taking. We never knew the Savannah River Basin was so vast! The lake held in by this dam stretches as far as the eye can see, with dense forests along the shore. Thurmond Dam impounds a lake that stretches 40 miles up the beautiful Savannah River and 26 mile up the little River. It has nearly 1,200 miles of shoreline and is one of the largest inland bodies of water in the South. The basin is home to many species of large prey birds including Bald Eagles.

There is a very nice Visitors Center manned on the day we visited by warm and welcoming Ranger Rhonda to greet visitors and help educate them. We learned so much about the dam,; the lake and the area.

The dam, which was built between 1946 and 1954 is named after J. Strom Thurmond who was the longest-serving and the oldest Senator in U.S. history with 48 years of service at age 100 ! Originally, the project was to be named Clarks Hill Dam but the “s” on the end of Clarks was omitted due to a clerical error in the original Congressional Authorization and the project became Clark Hill Dam. Later, the dam was renamed Clarks Hill Dam. In 1988 Congress renamed the project to J. Strom Thurmond Dam and Lake at Clarks Hill.

The dam is an impressive sight. It is 5,680 feet long, more than 200 feet high. As you look at it, you see a concrete causeway flanked by massive earthen embankments. Along with the dam is a hydropower production facility which, one of the educational markers states, more than paid for itself in 25 years of operations. The project performs flood risk management, recreation, fish and wildlife protection, water quality, water supply and downstream navigation. Along with Rangers, staff on-site include power plant operators, electricians and mechanics who operate and maintain the facility day and night. Add biologists and volunteers who work to protect the habitat and you have a very large staff of people cooperating to provide us with electricity, flood control and recreation on public land.

While we were camping in the area, we got an up close look at one of the major purposes of J. Strom Thurmond. During times of heavy rainfall (and we had some!) runoff waters are stored in the lake to protect thousands of downstream homes, businesses and farmlands from flooding. Thurmond Dam is the primary flood control structure along the Savannah River. From our elevated campsite, we watched the lake rise on one side of us and the contoured road dump water down a gully and into the lake. It would have been unnerving if we didn’t know that the levels are carefully monitored and adjusted as needed by ACOE personnel. 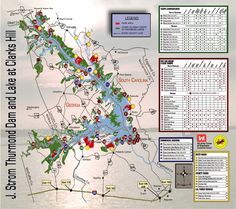 All of that water produces electricity made by the Thurmond generators. It is pollution free energy for residential and commercial use. The generators are an awesome sight. When they are in use, each one of them produces between 52,000 and 57,000 kilowatts of electricity. One generator operating one hour produces enough electricity to power 216 average homes for an entire year!  We learned that because alternating current (AC) electricity cannot be stored, Thurmond Lake stores water to produce power when it is needed most. The Corps is the nations leading producer of hydroelectric power, providing five percent of the nation’s electricity.

And electricity is only one component of the water management of the upper Savannah River Basin. During times of drought and low water, this system provides an adequate water supply to all users through a plan called the Drought Contingency Plan. Looking at all this water, it is ee06hard to even imagine drought conditions.

Nearest and dearest to our hearts is the fact that the Corps serves to ensure the protection and enhancement of fish and wildlife at Thurmond Lake. They concentrate on habitat diversity and they improve habitat for rare, threatened or endangered species. Rangers and biologists place special emphasis on maintaining lake conditions favorable for fish spawning and survival. Especially in the spring when it rains like it has since we arrived, lake level fluctuation must be minimized to assist spawning for largemouth bass and crappie.

In the particular camping area where we stayed, we found a blend of pine forest and hardwood bottom environments. This is perfect habitat for native wildflowers which are just now greeting Spring. We were able to view white-tailed deer, wild turkey and Canada geese along with some migratory waterfowl and tons of songbirds. It was a treat to sit outside in the morning with a cup of coffee trying to identify which songbird we were hearing. We use the Cornell University’s bird identifier App called Merlin on our iphone. We had loads of fun this morning playing the call of a Carolina Wren. It attracted a nice little male who hung around calling back to our smart phone and it also got Cracker the African Grey going inside the camper.  This is a bird watchers nirvana!

We are continually amazed at the work done by the Army Corp and the quality of their facilities. Thanks to all of our Ranger friends for taking such good care of these wild and beautiful places that inspire our souls!